HANGZHOU, China /Sep 11, 2017 As one classical Chinese poem goes, “The swallows once in mansions of the great now fly to ordinary peoples’ homes”.

UAV (Unmanned Aviation Vehicle), more commonly known as drones, are just like those swallows: once only found in military applications and war films, are now widely used in daily life. Military UAVs now are vastly outnumbered by civilian UAVs, whose use is expanding to commercial, scientific and even recreational realms. What distinguishes a Dahua Drone from other Civilian UAVs is the mission it is born with: to guarantee safety from above.

What is Industry-level drone?

There are in fact two levels of drones, consumer-level and industry-level. Dahua Drones belong to the latter.

Consumer-level drones are mainly designed for use in aerial photography and personal shooting/ sharing for entertainment. Naturally they are pretty straightforward to operate and can take easily editable images/videos, often with automatic beautification and other entertainment functions. 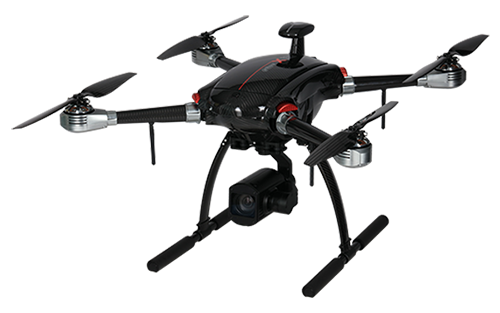 The current industry-level drones boast the capacity to transmit images at up to 10km, and with access to multi-VMS platforms, they can put real-time audio and video streaming on the screen of a control center, thus providing information for police or security companies to solve the problem on site, such as directing crowds for evacuation via the correct route or sending out a medical team to the location where it is needed.

Dahua Drones are easy to operate and use in situations such as the following scenarios.

Often located in mountainous areas, power towers are hard and risky to reach. Dahua Drones can enhance the efficiency while making it less labor-intensive.

Benefitting from x30 optical zooming ability, Dahua Drones can capture HD images at a long distance, thus avoiding the accidents that ordinary drones have encountered as a result of electromagnetic interference from high-voltage power grids and visual mistakes by people operating from afar. The thermal camera they carry can accurately locate abnormally hot spots in cables and insulation terminals, thus preventing accidents from occurring.

Via the thermal camera it carries, Dahua Drones can detect suspicious hot spots invisible to naked eyes. At a height of 1500m, a Dahua Drone covers an area of 5km², doing the inspection work of dozens of people in just one flight.

When there is a fire, Dahua Drones can fly to the site against high temperatures and strong winds, transmitting relevant data to ground teams, so that they can make the right move using this information. Once the fire has been extinguished, Dahua Drone’s overhead inspection can prevent a second fire. In this sense, Dahua Drone is one of the best aids to help fire fighters.

Arriving swiftly and secretly at crime scenes, Dahua Drones record real-time visual information about locations, traffic and personnel using its multifunctional camera, which is capable of optical zooming x30 (allowing the drone to work from a long distance where it won’t be noticed by criminals); thermal imaging (allowing the drone to work at night) and automatic recognition of faces or wanted cars.

Using wireless transmission the information collected is accessible to all mainstream VMS platforms. In short, it is a very powerful assistant for the police.

At public events like concerts, sports meetings and marathons, a Dahua Drone can provide special security surveillance from up high because of its multiple flying modes (circling around and tracking down the target), while its powerful camera can capture the whole picture as well as specific details and whilst benefiting from its long 38 minute battery life.

The beauty of a Dahua Drone lies not only in its ability to work from afar but also its safety whilst flying. Having undergone all sorts of extreme tests, this means when in use, a Dahua Drone will not disturb the crowd below at all.

Take New York City Marathon for example. There are thousands of participants and spectators spreading over a range of over 26 miles. It is quite a challenge to set up an effective surveillance system for such a 1 day event. Dahua drone can be very useful for such scenario. If properly deployed, 8 sets of model 820 drones can deliver very good coverage for the entire marathon. Each drone could take care of 6 km range by patrolling back and forth, staying still a few minutes at each of the 6 patrol points 1 km apart to have a good look at the situation under. These drones will be flying at 100m above ground to produce sufficient clarity to effectively identify mass casualty incidents such as stampedes or a traffic accident.

Obviously similar deployment of drones can also be applied to scenarios such as music festivals, open-air concerts and important political rallies, which will not only help security companies to work more efficiently but also provide evidence if illegal incidents occur.

The construction of massive bridges requires inspection, which usually takes lots of boats, equipment and experienced staff. Dahua Drones can greatly simplify the process and reduce the cost of money and time.

Dahua Drones can fly all around the bridge, checking the erosion, damage and other damages, while keeping a numbered record for experts to analyze afterwards.

It’s worth adding that Dahua Drones boast an outstanding ability to resist the wind (up to Windspeed 7.0), and are fully capable of maintaining highly accurate suspension over the river and providing stable visual information.

In daily patrols, when suddenly encountering the illegal behaviour of a driver, Dahua Drones can capture the HD image of it from afar and keep the record as evidence. Information about the car, the license plate and the driver will be immediately identified after the video is simultaneously transmitted to the back-end. In another scenario, if there is a traffic jam on a highway and nobody knows what is happening, Dahua Drone can provide real time and first hand images/video for related department to decide.

In conclusion, Dahua Drones can play a key role in various public security scenarios. Dahua has caught the latest technology trend and adapted to enable a Safer Society and Smarter Living. This is the future that Dahua Drones are helping us towards.